Got more than one child? Oh you don’t have to worry then because as soon as you have two they can play together right? WRONG! 😉 Sometimes they might play yes, but they are equally as likely to be trying to dismantle each other’s limbs with accompanying squeals that drill tiny holes through your soul. So here’s a few five minute ideas on ways to get different ages playing together, or how I split myself so they both get some one-to-one time with me.

ARRRRGHHH…this stage is HARD. There’s a reason I wrote this old blog post (click here!) and this age is it. Firstly, the guilt weighs heavy on you. Guilt about your first born being pushed out by their new sibling, guilt about the new baby not getting all the cuddles your first born did. Shit. This is HARD! Yep I get it. But two things, one - it does get easier and two - I have a couple of things to help.

Not forgetting the golden rule of course. If you do get five minutes simply lay out a puzzle or set up a five minute game for your eldest first before you sterilise bottles or shower if you can. It’ll buy you time later, and once they find it they delightedly think ‘this is for me’. Everyone wins. There will probably be A LOT of TV and screen time during this period - especially those very early days. Don’t beat yourself up about it. There’s time to play later.

NOTE - jealousy is really difficult to tackle. I’m no expert on this at all. But I was told to imagine my husband had bought home another wife I just had to accept, which helped me understand my eldest’s position! Patience, time and love are as usual the answer. However my suggestion to a friend was to give them a doll and ask them to do the things you are doing. Change it’s nappy with you, and get a scarf and make it into a baby sling and go for a walk together etc. Help them to see they are important and needed too. Constantly tell them the baby has done things for them, so leave a little game out and say “the baby and Mummy/Daddy wanted to set that up just for you” - and reassure with ‘it’s your turn now’ and ‘it’s your baby sister/brother’s turn now’. Refer to them as ‘YOUR baby sister/brother’ so they feel a connection and a sense of belonging with them. The second you get a chance cuddle, tickle and play with the eldest for five minutes at a time and explain to them why things have changed and that it’s ok, they are still loved just as much as ever. 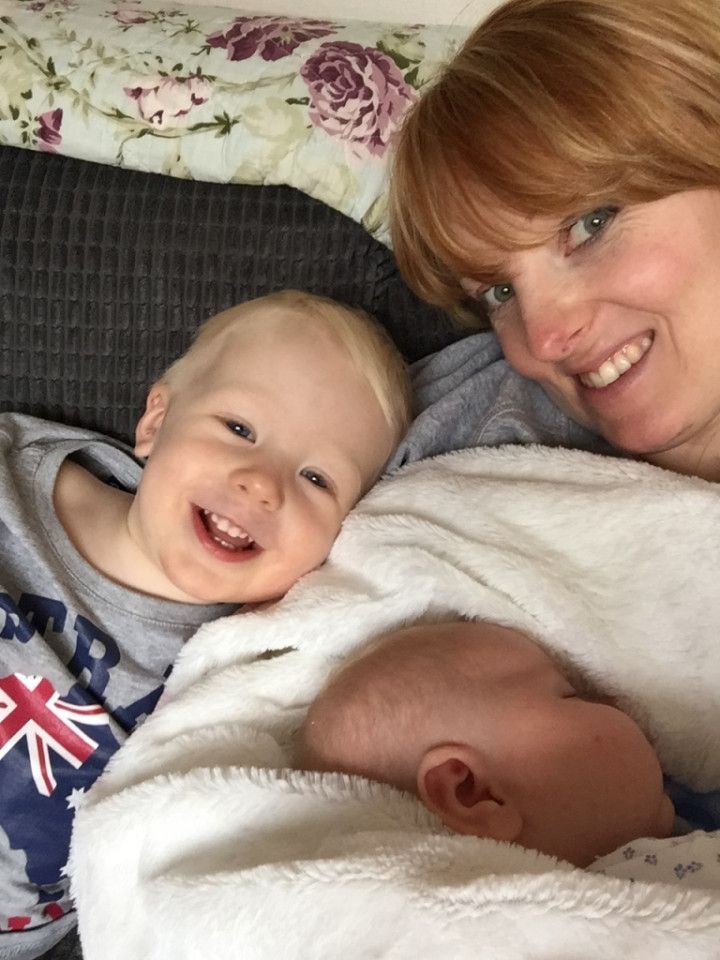 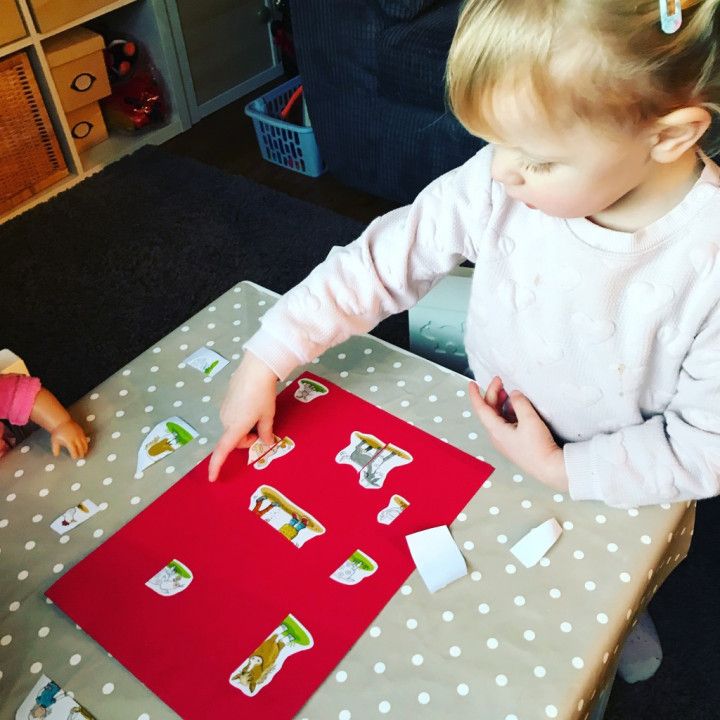 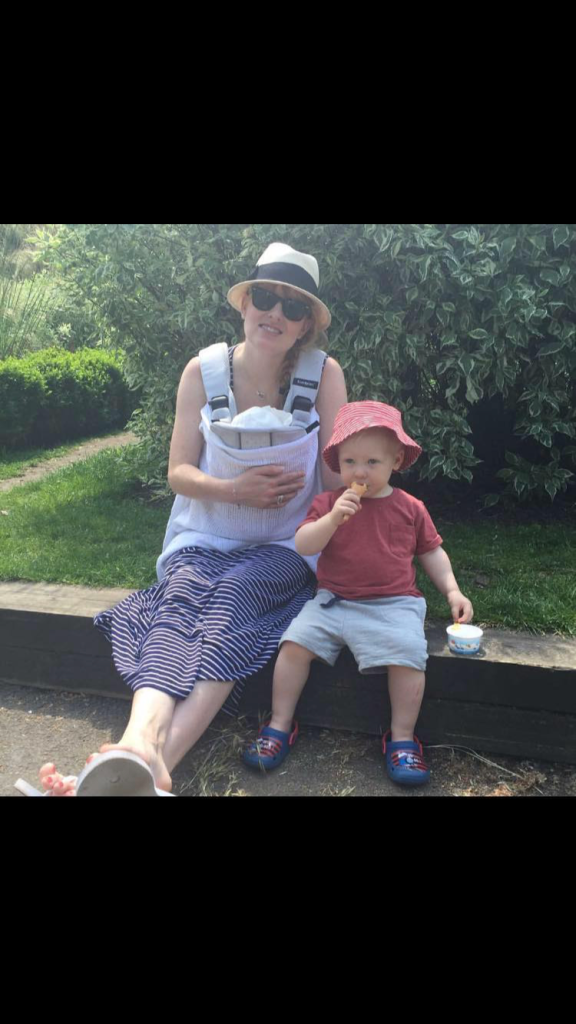 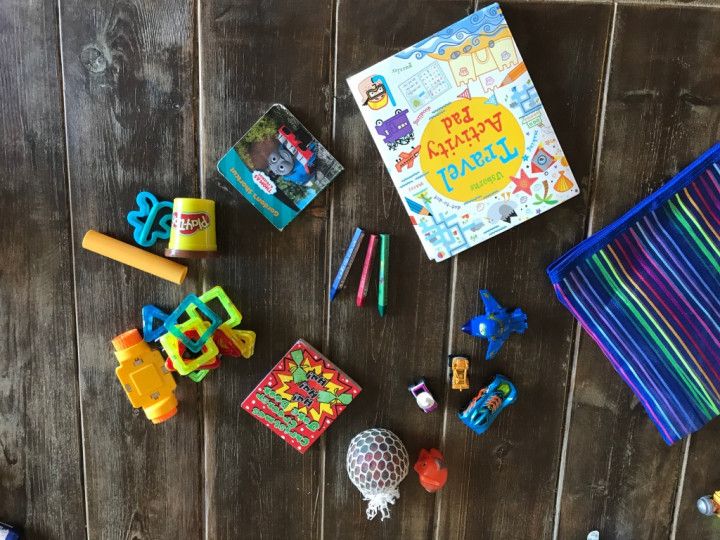 So your house is wrecked right? You feel permanently like you’re living in the centre of a mini hurricane? Multiple little people can be full on. So how do we play a game with two of them?

When Flo was 18m and Ewan 3.5 I really started doing letter and number games with Ewan, and Flo obviously always wanted to ‘play’ too - which meant she wanted to trash it. So I would always set up Florence with her ‘own’ version or game. If appropriate I would just do an exact version for her and sit myself in the middle, doing the game with Ewan and letting Flo do her own thing next to me as I fended off her advances to crash Ewan’s side. I use myself as a barrier and my voice to hold attention for as long as I can - so if were sat at the table I sit between them, or on the floor I lie or sit in the middle of them, with the games laid out either side.

So for example if I set up Letter Diggers, Flo sat up at the table playing with her own tray of diggers and sand and Ewan with his diggers and letters hidden in the sand, and me wedged in the middle commenting on them both. Similarly with playdoh, Flo just had a blob and cutters to explore and I would make sausage letters for Ewan, whilst checking Flo wasn’t eating the playdoh. Water play was always good so I’d get a couple of washing up bowls so they would have one each and we’d fish out letters or toys etc. I’d sit in the middle as they did it. I have two buckets and two trays for this exact reason. The trays I use and recommend are from IKEA but you can also buy them on my Amazon Shop HERE. (affiliate link) 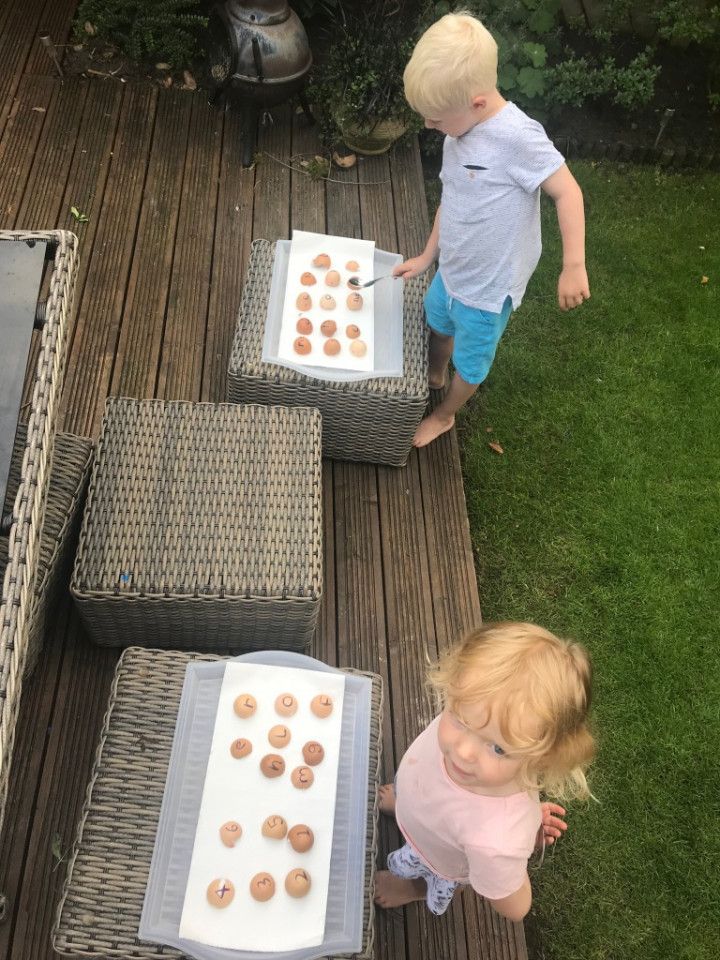 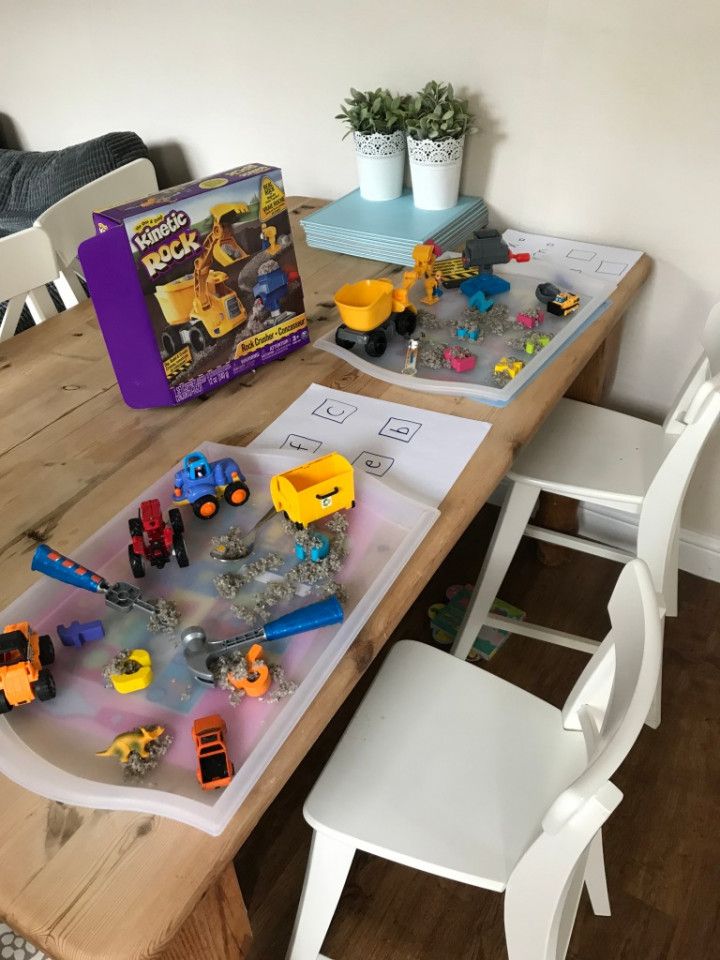 Games to play when Flo napped

Once Florence got into a regular routine of napping after lunch (ah golden times!) but Ewan no longer napped, I had time to do five minute games just with Ewan. Often for that hour he would be allowed on the iPad on a timer and I would have a rest, but just after I’d give him the ipad of switched the TV on I’d set something up for when the timer ran out for us to play until Flo woke up. The sort of game we would do would be The Spider’s Web, The Number Thief, The Code Breaker, Toy Tombola and Henry’s Games.

Games for them both

However if the nap has been skipped (oh nooo!) or I’d fallen asleep on the sofa during iPad time (regular occurrence!) then I’d set up a five minute game Flo could do as well. Games such as:

The Treasure Hunt - brilliant for all ages. She just loved finding the puzzle pieces, Ewan and I chatted about the letters or the pictures.

Letter Reaction Wall and Alphabet Fishing - because both these games involved letters that are different colours, I would get Ewan to spot the letters and ask Flo to tell me the colours.

Puzzle Pass the Parcel and Sink or Float are games fun for both of these ages in the Rainy Day Games blog.

Crack the Egg - Flo would have small toys hidden in her egg, and Ewan had letters or numbers - they both got a chocolate penny though 😉

The Ball Pit - again Florence just had to get different colours and put them together out of the balls and Ewan had to find his name which I’d written on them.

I also used to set up games from the 1-2 year old blog, Speech and Language Blog or Games for Flo blog post and do a version for Ewan because he always enjoyed it too. Just because they are older doesn’t mean they don’t enjoy exploring something a bit different, that little ones love. Once they got a bit older the games could be a little more ambitious. You can start the turn taking and adding an element of gentle competition between them. You can play skittles with cups in the kitchen (6 cups stacked in a pyramid with a ball!) or Toddler Pong where they can both have a go and learn to take turns.

Often what I would do here, if a game was designed for Ewan to recognise words, letters or numbers I would let Florence have a turn at the physical element of it, and tell her to show Ewan what she had got! She still got the ‘point’ but Ewan was doing the recognition I wanted. This is great for Toddler Pong!

A great example of this is the Stepping Stones game. This can be varied for so many ages. For Florence I did number recognition or colour recognition and for Ewan we were doing tricky words and Phonics digraph sounds. You can mix this game up in so many ways - my friend Gemma played with all three of her children aged 2, 4 and 6. Doing times tables and spellings for the eldest. Go Gemma!

The Pirate Treasure Map is another great one for all ages. Just replicate the map for each child and change what they need to find. For Ewan it was his phonics sounds from school, for Flo is was just pennies or magnetic letters. Or Ewan had to write the letters and Flo had to just find them. In teacher talk this is ‘differentiating’ which really is just varying it based on ability.

The Shop is also an excellent game for many ages - for little ones they can just give any number of pennies to you as the shop keeper but as they get older you can ask them to match the number of pennies to the price on the toys or even to work out the correct money and change for much older ones. They can also all take turns being shopkeeper.

My main piece of advice is to try and always make two of everything or a version each. I have two of these IKEA trays. I set out so many of my games and activities on them. Part of the reason I don’t have a tuff tray is because I think it would cause fights having one set up, and I’m certainly not owning two of the damn things! If they have a smaller tray each I find it easier to say “no, this is your one.”

Get them to take turns from day one. They both choose a story at bedtime and take turns to hear it. They both understand they will get their chance. The sand timers I mention in the Independent Play blog are crucial to help with this too, especially if they both want the same toy. Saying they have two minutes each really helps them to understand fairness and sharing.

Recently I did some egg smashing (an idea from my friend Susie’s page) and I did a demo video of how I split myself. Flo had letters and numbers to smash, Ewan had words, sums and phonics sounds to smash. Same game, just varied slightly for each age, and me plonked in the middle chattering to them both. You can find the videos of me playing with both the kids together HERE! 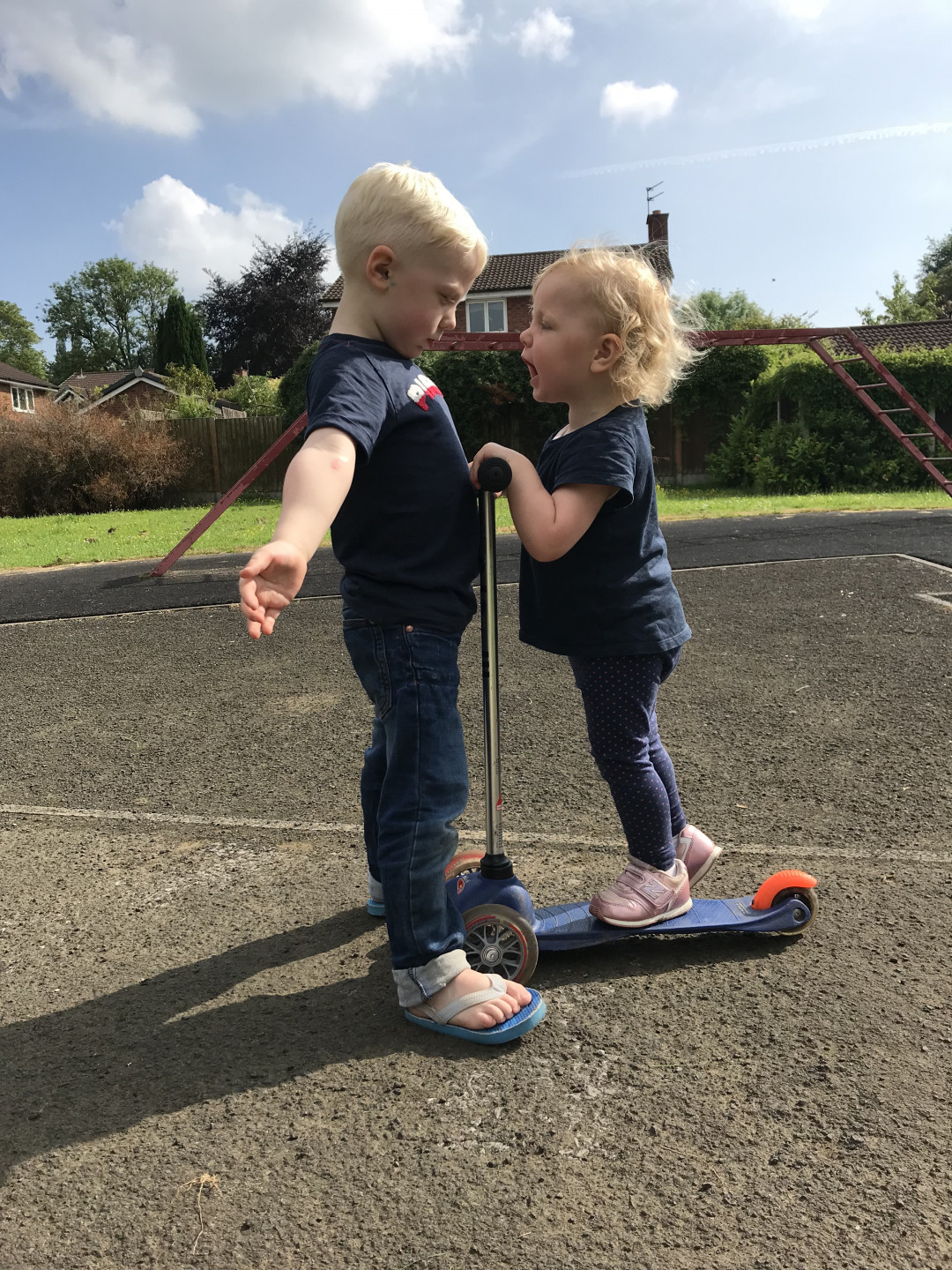 Our Trip to Disneyland Paris

When I was a little girl, aged 7, my parents took me to Disneyworld. I had the most magical,…

Using doll play to help toddlers with a new baby

I’m sure like many of you who have also awaited another arrival, doubts spun endlessly around…